We were between the towns Winchester and Hinds when It all went wrong.

It started on a lovely morning on state highway 1 and the animals were all running and frolicking in the lush green grass. A ravine dropped to the left-hand side of the highway, it was so deep, it looked like the gateway to hell. The drive from Dunedin to Christchurch was quite the road trip, especially for Amanda, my 3-year-old daughter. Amanda always hated road trips but she always liked the destination.

We were just casually driving when all of a sudden a wallaby jumped in the middle of the road! My first reaction was to turn right but I accidentally put my car in reverse and by the time I remembered that there was a ravine there, half the car was hanging off the edge of the gaping hole. I slowly unbuckled my seatbelt because the slightest weight shift could make the whole car fall. I tried to reach for my phone and call 111, but as I did so, I felt the car slowly shifting its weight.

“Hello?” I whimper into the phone.

“Hi mam, my name is Keisha, could you please explain your situation to me?” replied the emergency responder on the phone.

“Um, my car is hanging off the side of a ravine, and  I’m in my car with my 3-year-old daughter.” I shakenly said.

“Could you please tell me your location mam?” she asked.

“I’m on state highway 1 in between Winchester and Hinds,” I told her.

“I’ll tell the fire department to find you and get you out of your situation, in the meantime please keep calm and don’t move,” she demanded.

After an hour, I heard sirens and saw flashing red lights. The fire trucks parked just in front of the car. A man hoped out of the fire truck and approached me.

“Do you have any unlucky passengers with you today?” He asked

“My 3-year-old daughter is in the back with me, get my daughter out first,” I told him.

“Okay mam, we’ll get you out at the same time,” he said

They managed to get me out first but then I realized the physics of weight. I was the anchor, the one that stopped the car from falling into the ravine. Then all of a sudden the car tilts back and drops into the great ravine, with the fireman that was saving my daughter and Amanda.

“This is all my fault.” I sobbed

I didn’t mean to kill her.

Last week when the yr 7 & 8 were away, we did lots of activities.

Alesha( the meerkat ) woke up to a lovely hot day in the savannah, but one thing was missing…

Alesha was filled with despair when she found out the fruit was missing. They had spent many seasons caring for their precious tree, and the fruit was priceless in these regions. It was a mob heirloom that has been passed down through many generations, and as the leader of the meerkats, Alesha had to care for it the most. She called everyone to show them what had happened to their valuable fruit. The atmosphere around Alesha was now filled with emotions of depression and sorrow. Alesha was now fuming with rage, who would dare steal their luminescent, beautiful, pink fruit that smells like strawberries, raspberries, blackberries, blueberries and black currant. Alesha scurried onto the largest rock she could find and began to address the meerkats, “ My fellow meerkats, someone has stolen our fruit and taken it far away from us. Whoever this someone is, we will put them to justice and reclaim our fruit. WHO IS WITH ME!”, (other meerkats) “ YYYYEEEEAAAAHHHHHH!!!”.

“No leads on the investigation yet Chief Alesha, but we did find a bit of evidence, a feather the colour of dark clay.” replies one of the meerkats.

“Hmm, Interesting, look more into this piece of evidence and find out who’s feather it is, and thank you for the report sergeant Mark, you may leave now.” says Alesha.

It was humid in the tent, but it was the only way to keep her and the other meerkats from getting scorched in the flaming sun. The sandy dyed tent hid them from dangerous predators of the savannah.

“Any leads yet Sargent?”.Alesha asks as another meerkat enters the tent.

“Yes Mam, we have our suspicions on a vulture named Zhao, we believe he is the one who stole the fruit.” replies the meerkat Sargent.

“Gather a small squad to investigate, I will go too and Deputy police chief Emily will be in charge.”. Says Alesha.

“AAAHHHHH!!!” screamed Alesha as she plummeted to the ground and full speed.

“ALESHAAA!!” screamed the other meerkats in shock.

“Chief Alesha, are you sure you want to jump and grab the fruit out of Zhao’s talons?” questioned a meerkat that was a part of the squad that was sent to retrieve the fruit.

“It’s the only way,” responded Alesha.

Alesha and her squad of meerkats were following Zhao in the middle of the savannah. They were gradually catching up to Zhao and were now going to reclaim their fruit. Alesha took an almighty jump and managed to get a grip on the fruit, but Zhao noticed her and shook her off the fruit, but one of Alesha’s meerkats caught her and they tried again but this time she had help from her meerkats. A meerkat boosted her up and this time she got a good grip on the fruit. Zhao tried to shake her off but Alesha had too good of a grip so he gained altitude to try and make her let go. The meerkats acted fast and started to make a meerkat chain, when the last meerkat possibly joined the chain, all the pressure was on the last meerkat. He was the anchor to hold them but he lost his grip so he stopped trying to resist and joined the flying train. The meerkats were swaying and weaving in the air. Zhao did a final flick and the meerkat chain broke apart. They were all now skydiving and Alesha finally had the fruit in her tiny paws, but now was no time to hug the fruit because they were still in mid-air and Zhao was heading right at her. Alesha used her instincts and passed the fruit to a fellow meerkat in mid-air. They continued to pass the fruit around the group until Alesha had the fruit again she just passed it then WHAM!!…

Alesha woke up with a sore head and was lying on her back. “What happened?” she said to herself. She sat up and looked around and then she saw her fellow meerkats tossing the fruit in mid-air and that reminded her of what happened. “I have to help them,” she told herself. She hefted herself up and ran to the spot below her friends. Zhao now had the fruit and Alesha could do nothing to help. She looked ahead and saw a cliff, but do you know who didn’t? Zhao. The fruit was not claimed and it was going to splat. Alesha acted fast and tried to catch the fruit, but her friends were there to help and they caught the fruit for her. They passed the fruit to Alesha and Alesha passed it to another meerkat, but then the fruit continually passed from meerkat to meerkat until someone drop-kicked it over a pair of branches and it splattered on the dense ground. “IDIOTS!!” roared Alesha

In the wide bay, an old bomb warehouse sits gazing towards the large open bay. Giant rocks line where the hill meets the sea where marine life flourishes with barnacles, mussels, and little creatures that scurry around on rocks and in pools.

The pungent scent of sea salt makes my lungs burn and screech and the smell of decaying animals torture my lungs.

As we paddle to the warehouse, the waves get rough and bumpy, and as we struggle the wind denies our entry to the shore of the warehouse and salty water manages to enter my mouth.

The sound of the waves crashing against mammoth rocks is all around me, echoing throughout the bay. Wind whistles in my ears as if it is trying to deafen me.

I dip my finger into the warm, soothing water. As we beach and cargo the kayaks to the trailer. It takes all my strength to heft the heavy kayak across the beach, up the stairs, and place it behind the trailer. My friends go back down to the beach to have one last splash in the mid-temperature water. I chose not to join them because the late afternoon breeze was getting to me and the clouds were gathering above us. They beckoned to me to join them in the water, but I refused to join. I sat there on the front seat, warmth filling me throughout my body. Once we came back from kayaking, I headed straight for the shower. 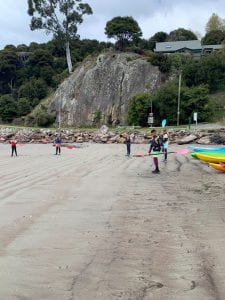 The first reason why Wings Of Fire is my favourite series is that everything fits together in the end, and every book is from a different perspective or switches perspectives. The other reason WOF (Wings Of Fire) series is my favourite series is because of the way Tui.T Sutherland ( the author of WOF) expresses the character’s emotion (mainly romance) eg. Arctic twined his tail around Foeslayer’s or Moon started to droop her wings. Another reason why I LOVE the WOF is because of the different breeds of dragons there are, it’s not like they all have the same features and look the same except for the colour, but in WOF series they all have different features and natural weapons and have colour pallets of their own. The last reason why I LOVE the WOF series is that the characters aren’t on the perspective of a human and that is what I love the most about the WOF series. So those are the reasons WOF in my favourite book series. If you don’t believe me then just ask New York Times, It’s the #1 bestselling book series. 🙂

The highlights of term 3 for me are; cooking and baking nachos and pastries in Tuhura, the explanation writing because I learned a lot from Mrs. Campbell about that, learning about the digestive system, youthtown, and learning about different electricity/energy sources. The thing that I learned the most this term is my explanation writing because I realized that writing needs to be carefully planned and not just rushed.  Altogether I enjoyed term 3 in general. I hope term 4 is the same.

My hero is my sister Mai. She is so generous, kind and caring, even when she is sad or angry. She never raises her voice at me and when something is not ideal she finds always a way to doge it. She’s a good storyteller, comedian and adviser. She always asks politely if she wants something and she does everything you ask her to do if you ask politely.

In term 4 wk 2, we’re going on camp to Wainui and going to do; coasting, archery, canoeing and high roping. The week after that I’m going to be an aunty because my sister Mai if going give birth to a baby girl called Marley on the 27 of Oct. 3 days after Mai’s birthday!